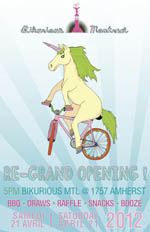 La Grande Braderie de Mode Québécoise @ Marché Bonsecours, 350 Saint-Paul East. This four-day semi-annual fashion sale will feature the creations of up to 100 Quebec fashion designers, selling women’s, men’s and children’s wares, as well as accessories, shoes, leather, fur, lingerie, swimwear and more! Most importantly, you will save 50% to 80% off all items. Hit it up! A list of vendors is available here. The sale runs from 10am to 9pm on Thursday and Friday, 10am to 6pm on Saturday, and 10am to 5pm on Sunday. Visit their website for more information!

8pm. Jay Reatard: Better Than Something @ Blue Sunshine, 3660 St-Laurent, 3rd floor. The life and music of Memphis garage/punk-rock icon Jay Reatard (yes, that was his name) is chronicled in this acclaimed documentary film produced following his death in January 2010. The screening is presented by Blue Sunshine and Film Pop. $8.

9am. Flea Market @ St-Gabriel’s Church, 2157 Centre, Point Saint-Charles. Montreal’s craft fair season is finally entering full swing! Pick up local handmade accessories, vintage finds, quirky gifts and summer trinkets at this two-day flea market, which runs from 9am to 4pm both Friday and Saturday. Check out the Montreal Craft Fair Facebook page for more information about attending or participating in upcoming 2012 craft fairs around the island!

8pm. Death Cab for Cutie @ Église Saint-Jean-Baptiste, 309 Rachel East. So, Death Cab will be performing in a church. That’s what’s up. Joined by The Magik*Magik Orchestra, prepare for what I can only imagine will be a unique evening of your favourite melodious Death Cab hits, delivered from a pulpit. Tickets are $46 or $56 (plus tax) and are (obvs) selling out extremely fast!

5pm. Bikurious Re-Opening Party @ Bikurious, 1757 Amherst. Custom bike builders, mechanics and vendors, the multi-purpose Bikurious bike and repair shop team willre-launch just in time for the summer cycling season! BBQ, booze and bikes – that’s what Montreal (and this event) is all about!

9pm. Modeselektor @ Metropolis, 59 St-Catherine East. Berlin-born electronic group Modeselektor will light up Metropolis this weekend for a crazy night of bust-a-move-rave-dance-beats. Egyptrixx and Lunice will open the show! Buy tickets ($31 each) here.