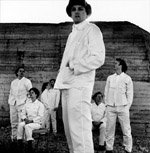 As a result of POP Montreal and all the great bands taking over the city’s venues right now, this week’s hit list is almost exclusively music-oriented. Enjoy!

POP Montreal International Music Festival @ numerous Montreal venues. POP Montreal celebrates its 10th anniversary this year with a fabulous array of art shows, exhibits, concerts and much more! Largely, this is a wonderful showcase of musical talent and an excuse to attend a show every single night of the week. Take a gander at the full schedule and all ticket information.

8 pm. Free Arcade Fire Show @ Place des Festivals, Quartiers des spectacles. Yes, the FREE Arcade Fire show that everyone has been talking about for months is finally happening, in participation with POP Montreal. Kid Koala and Karkwa will be opening. Get there early – the crowd will likely be intense and enormous. Or, catch Arcade Fire on Wednesday night (September 21) at Metropolis for $50.

11pm. Fucked Up @ Église Saint Édouard, 6500 Saint-Vallier. Another POP Montreal possibility a little later in the night: Toronto hardcore/punk band Fucked Up take the stage, accompanied by No Joy and Tasseomancy. Mosh pit certified. $15 in advance, $17 at the door.

8pm. The Planet Smashers @ Club Soda, 1225 St-Laurent. My ex-boyfriend loses his shit for this ska-punk band, and admittedly, they are pretty great live. Grab a man-friend and check out The Planet Smashers; they’ll be joined by The Creepshow, The Fundamentals and East End Radicals. Bring ear plugs and a will to survive. $20. (Wait! The Planet Smashers are also performing Saturday (Sept 24) at the same venue, with a different gang of opening bands: go go go!)

8pm. Chromeo @ Metropolis, 59 St-Catherine East. Our favourite home-grown electrofunk boys are back for a big-time spectacle at Metropolis. We Are Enfant Terrible and AEIOU open. $32 (buy your tickets here).