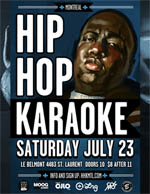 Fantasia International Film Festival @ Théâtre Hall Concordia (1455 de Maisonneuve O.) and other locations
Fantasia celebrates its 15th year as North America’s largest genre film fest, specializing in horror, martial arts, and experimental films from Asia, Europe and the Americas. The fest crams 370 films from 31 countries into three weeks of programming. This week’s highlights include the Canadian premiere of Midnight Sun, the tale of an average joe’s descent into vampirism (July 19 & 21); the world premiere of Victims, UK director David Bryant’s real-time thriller shot in a single 90-take (July 20 & 23); and the Montreal premiere of Rare Exports: A Christmas Tale,  a Finnish-Norwegian dark comedy-horror-fantasy, which features Santa Claus as you’ve never seen him before! Visit their website for complete scheduling and ticket info.

4pm POP Bike-In 2011 @ McAuslan Brewery
POP is inviting people to unite for some free outdoor fun for its annual Bike-In at the McAuslan Brewery. An afternoon of music, BBQ and rumours of a hot-dog eating contest are in the works, as well as a screening of Ladies and Gentlemen, the Fabulous Stains, taking place under a July sunset.

6pm Montreal Roller Derby @ Arena St Louis, 5633 St Dominique.
The scrappy gals of the MRD get their derby on in this bout between La Racaille and Les Filles du Roi. Sure to be a smashing good time. Tickets $12 in advance (available here), $15 at the door.

10pm Hip-Hop Karaoke @ Le Belmont, 4483 St Laurent
Time to let those rap skillz shine at Round 3 of Hip-Hop Karaoke Montreal at Le Belmont. Pick a track from the song list, pre-register at hhkmtlat and start practicing your mean muggin’. Word up! Doors 10pm, $8 after 11pm.