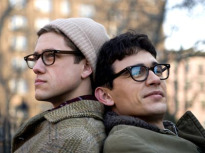 It’s a tall order to transform one of the most influential poems of the 20th century into a feature length film, and capture the charismatic writer behind it in the same piece, but Rob Epstein and Jeffrey Friedman succeed in Howl, the new biopic about Allen Ginsberg, playing this week at the TIFF Bell Lightbox. James Franco plays Ginsberg, Beat poet, activist, and icon. The film weaves the story of Howl’s creation with its first reading in San Francisco, and the subsequent obscenity trial against its publisher, City Lights Books.

Fans of Beat literature won’t be disappointed. All the key players make an appearance, and Franco is a tour de force as Ginsberg. Narrated as a long interview, Ginsberg recounts tales of meeting Kerouac at Columbia, discovering his own sexuality, falling in love with Neal Cassady, being institutionalized after losing all his manuscripts in a stolen car chase, and meeting the man to whom he would dedicate his first great masterpiece, Carl Solomon.

Intercut with Ginsberg’s reminisces are scenes from the obscenity trial. Jon Hamm plays a commanding John Erlich, the lawyer defending Howl as great literature. Andrew Rogers plays Lawrence Ferlinghetti, who as Howl’s publisher is the one on trial. High-profile actors like Mary-Louise Parker and Jeff Daniels take the stand as witnesses, and David Strathairn eloquently captures America’s collective cultural fear of revolution they don’t understand as lawyer Ralph McIntosh.

The poem is represented through surreal animation by Eric Drooker, but what truly brings the work to life is Franco’s impassioned performance of a reading in San Francisco. In the crowded bar, Franco recreates a historical moment to perfection.

The film succeeds as an excellent celebration of a talented creator, and an incredibly important moment in the history of America’s cultural dialogue. This is a must-see for fans of Ginsberg’s work.