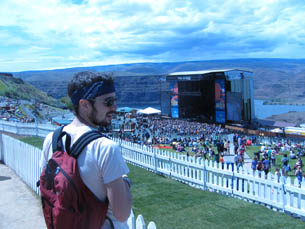 I wake up at The Gorge on Saturday morning to Justin and Robyn listening to Dinosaur Jr., drinking PBR, and eating free bagels and organic cream cheese. After assembling our necessary items, we headed out of the camp site down the winding path to the festival, amidst a sea of tanned kids dressed in varying degrees of Native American cultural appropriation or as Where’s Waldo.

We start the day with Edward Sharpe and the Magnetic Zeros. The set felt like a party waiting for the keg to arrive-but that wasn’t the band’s fault. They delivered a passionate performance, the only fault of which was perhaps not taking into account the sheer volume of the sea of girls covered in feathers and body paint to hear ‘Home.’ The set had an anywhere-but-here feel.

As the sun set, Kevin Drew and his (it pains us to say, I SWEAR) self-congratulating worldwide caravan unrolled its tents for the last time this tour on Sasquatch’s main stage. Performing a lot of new material, with no surprises, Broken Social Scene‘s set felt exactly like what it was-the last show of months of continent-tripping. The media tent was slinging mud at Lisa Lobsinger, whose pristine voice and angelic looks make it all the more of a bummer that every time she steps onstage there’s a subtle but disinct pinch-hitter groan. At the end of their set, Drew thanked the crowd and asked if anyone could give a fellow bandmember a ride up to Vancouver, so he could be home in time for his kids’ birthday party. Everyone except the Canadians seemed confused by this.

The highlight of the night was The Very Best. Performing in a packed and sweaty dance tent, their African hip hop dance explosion whipped the crowd into a manic frenzy of cheekbone-aching grins and psychedelic dancing. They leapt off speakers and into the audience, the dancers quaked across the stage, and the music was so loud it hurt. Better than drugs.

Over on the Bigfoot stage, The Hold Steady played in the sunset with a steadfast crowd of loyal fans, all of whom knew all the words and had a fondness for fist pumping.

After dark, every college co-ed in the Gorge gathered to make eyes at each other for Vampire Weekend, which felt like a rec hall dance in a small town, where the band just happened to be a surpisingly babely crew of music nerds you’d be stoked to introduce to your parents. The band rocked through all the crowd pleasers with genuinely touched grins and cordially thanked the Gorge for having them.

Waking up with Dinosaur Jr. and PBRs

These guys came to play for everyone in line

These guys asked if I was taking their picture for a furry fetish website.