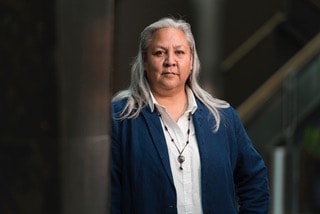 When Roz Owen, a non-Indigenous woman, set out to make a feature film, Trouble in the Garden, based on the 60s Scoop, she wanted to make sure she told all sides of the story. She consulted with Raven Sinclair, a survivor of the 60s Scoop and a professor of Social Work at the University of Regina. Raven came onto the project and was deeply involved throughout.

We spoke with Raven about her experience as a consultant and producer of the film, and what her healing process has looked like in the aftermath of the scoop.

SDTC: How did you connect with Roz?

RS: Roz cold-called me. She’d heard an interview on CBC. She appreciated what I had to say and how I said it, as a survivor of the 60s Scoop, and as an academic, whose primary area of interest is the 60s Scoop. She had wanted to tell this story and wrote this script that had a 60s Scoop theme to it. We connected and had a long talk.

One of the things that solidified our interest in working together was that she wanted to use a theme from this Swedish subtitled film that she really liked. When she told me the title, I said, “Oh my god, that’s one of my favourite films of all time!” That really gave me a sense of the story, and how she wanted the theme to play out.

I said, “Send me the script.” I couldn’t stop reading it, it was like a good novel. But I also saw its limitations; I was able to see where Roz was—even though the script was good—she was limited by her own world-view. As a 60s Scoop survivor and Indigenous academic, I could see where some wording changes, even some scenes, needed to be shifted in order to satisfy me, and the audience I represent. I said, “Ae you open to me providing some editing and changes to the wording for some of the scenes?” And she said sure. I dove right in and we worked really collaboratively from that point.

Were you able to be part of the production process?

That’s the one regret I have: I couldn’t attend the shoot because I was teaching. But I’ve learned so much from the whole project. That brings a whole other piece to seeing a script coming to life. She consulted with me on the casting and music, and friends of mine provided a song that is really a pivotal piece of the film. And the editing piece was amazing to me—to see how that’s done.

What was it like to see a 60s Scoop story represented in a feature film?

I can’t recall any film where it’s happened before. It was brand-new and unique. There are so many stories; from horrific experiences that kids had, to really positive Brady Bunch-type family scenarios where there was unconditional love, and nurturing and adventure. I appreciated that this film wasn’t completely negative, and it portrayed, in a tempered way, a backstory that is a challenging one, but very real.

At Whistler, there was a woman who stood up and said, “This is my story.” The challenge was creating a story that was true to the general experience, but showed that even within a challenging story there are positive things that happened. We see her resilience, that she can prevail as a human being, despite challenges.

Did any of the scenarios mirror your own experience?

So much of it. I didn’t experience sexual abuse in my adoptive home, which I’m really grateful for. I did in my foster home. Some of the themes are quite subtle; the fitting in or not fitting in to the family. She’s portrayed as a rebel, and the black sheep. That’s a theme that’s so common to many survivors; we’re in this upper middle class setting and we stick out like a sore thumb.

Do you think that your involvement as a professor specializing in this, and going on to be a consultant for these types of project, has helped you heal, in a way, from the 60s Scoop?

No, I tend to think of it as a natural outcome of recovery. I started doing pretty intense therapeutic work when I was in my early twenties. I’m late fifties now, so it’s been a long journey. When I was young and really angry and hostile and resentful and bitter, I caused a lot of suffering for myself because I didn’t know how to cope with all the things that had happened to me, and my dislocation and dispossession from my Indigenous self, my Indigenous community.

As I went through my recovery—and my education was part of that too, learning how to contextualize my experience in Canadian history—it changed me. My recovery work and my education changed me. I’m a social work educator; so I think it’s important that we walk our talk, if we want to train people to help others, we have to learn to help ourselves.

I’ve discovered as I’ve reached a certain place in my recovery, creative endeavours have come into my life, and I’ve created the space for them. I’ve been working on a play for a long time and I’m starting to gather the people together who can help me to create it, and a documentary came out of my research, then this film came along. I’ve started to do spoken word. I’ve taken up guitar. My goal is to write some music for a second film project. It’s a natural progression for me, as I’ve become content and happy in what I do, it’s important for me to make space for these creative things. And film is an amazing way to do that. I’ve always loved reading, but reading a script triggers your imagination.

What do you want people to understand about the 60s Scoop?

I think its important for everybody to have a really good understanding of our collective history. Stereotypes about different people; it’s really just a manifestation of ignorance, as far as I’m concerned. If you really know people, you’re not going to have so many stereotypes about them. And then you’re probably not going to treat them in ways that are rude or oppressive.

I’m all in favour of people having more knowledge and education, so if this film triggers more people to be more open to learning about collective history, then that’s a good thing. It’s important in terms of both the residential schools and the scoop to understand just how many Indigenous people have been affected. When we look around and see some of the turmoil that Indigenous communities and individuals are still contending with, we really have to understand there is a context there.

Life can hand you some pretty challenging things, but you deal with it and make the best of it, and look for the opportunities that are out there.