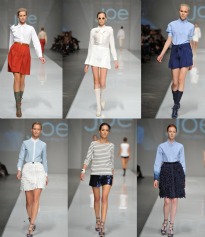 Scouts Canada uniforms get a reFresh, and other musings from the Joe Fresh runway

As if we needed another reason to be envious of kids these days, (um, they have iPods and Yo Gabba Gabba!**) Joe Fresh just announced that Mr. Mimran and co. will redesign the uniforms for Scouts Canada by Fall 2011. And if they’ll be anything like wifey, Kimberly Newport-Mimran’s uniforms at Holt Renfrew and Porter, we’ll count this as another one strong for the full Mimran takeover of Canadian uniforms.

We find this out on the day of Joe Fresh’s spring runway show, one of the most anticipated –and crowded- shows of LG Fashion Week. The well-heeled spectators packed themselves into the aisles between full sections, just to get a glimpse of what we’ll be seeing at our local Loblaw’s.

While Mimran admits he was never a scout, the influence was certainly palpable in much of this collection. Canadiana badges adorned collared blouses and there was no shortage of khaki skirts and skinny cargo pants.

But there are two sides to every story, and aside from the military explorer theme, there was still plenty of room for that deeply accessible chic that fuels the Joe Fresh engine. Think 60’s summer dresses for those with Mad Men on the brain, meshy knits and pussy bows galore, perhaps something more for the moms picking up their kids from girl guides. My favourite was the collared gogo dancer dress, ideal for Quadrophenia renactments and singing into my hairbrush to Be My Baby by the Ronettes.

Expect to be even more saturated in Joe Fresh, a new store just opened in Vancouver, and according to a certain fashion editor’s tweets, there will be three more in Toronto.

**The show that never runs out of wicked musical guests, like MGMT, Chromeo and Of Montreal.