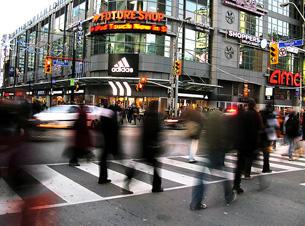 Words and photos by Melanie Ormston

Finally, City Hall was buzzing with excitement around something other than recent city councillor sex scandals and Toronto Transit Commission drama. On Thursday, February 18th, Mayor David Miller was joined by Canon Canada President and CEO Kevin Ogawa at Toronto City Hall to celebrate the students that participated in the Our City, Our Stories powered by Canon photography contest. All 10 finalists were in attendance at the evening gala where the top three winners were revealed.

Our City, Our Stories powered by Canon is a City of Toronto and Canon Canada community arts project and photography contest designed to build youth skills in digital arts, visual storytelling, self expression, engagement and leadership in the city’s Priority Neighbourhoods for Investment. It goes without saying that we all value safety, social equality, and the well-being of our city – and as such, both The City and progressive companies like Canon Canada have made it a priority to provide youth in vulnerable communities with opportunities to achieve their full potential. As part of this project, 152 digital photography workshops were held in Toronto schools and community centres between February and December 2009.

Mayor David Miller gave his heartfelt congratulations to the contest winners and project participants – each of whom was clearly proud and excited to be showcasing their work at City Hall. “This project is a terrific example of how the City is accessing and nurturing the artistic talents of Toronto’s youth in our Priority Neighbourhoods. The high quality of all the photo series submissions speaks to the success of this endeavour.”

The top three winners were rewarded for their effort and outstanding work by each receiving a Canon SLR camera and a Canon photo printer. This free exhibit will move to the Etobicoke Civic Centre from March 11 to 25 and to the Scarborough Civic Centre from April 12 to 21.

Each collection of photos is as strikingly unique as the participants who created them.  You can check out the top 10 finalists’ photo series here: http://www.flickr.com/photos/ourcityourstories/sets/

And it doesn’t end here. The first place winner, 20-year-old Jawad Mashuque, also has the chance to have his winning entry purchased by the City’s Fine Art Collection, as well as the opportunity for an internship with the City of Toronto’s Arts Services. The second place winner, 17-year-old resident Mapela Uhindu-Gingala, was presented with a gift certificate for up to $200 for photography related materials or instruction, and the remaining seven of the top ten finalists went home with a Canon point and shoot camera.

It’s definitely worth it to take in this showcase of local talent… and something other than politicians running from the media.

CONTEST: We want to send you to World-Changing Women with National Geographic Editor-in-Chief Susan Goldberg

July 2018: Hot Hot Heat and the Reckoning of a Diseased Society