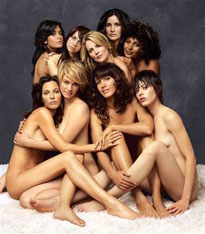 Just recently, the lesbian community of the world suffered a devastating loss. No, not the news that Jennifer Love Hewitt is dating Jamie Kennedy; but rather, the ending of a beloved era. On Sunday March 8 2009, Jenny Schecter passed away….from our lives forever. And with her, went the entire lesbian community. Aka. The L Word.  Some might say that this is old news, that it has been a century since the show ended; but for lesbians like myself, I have only been able to come to terms with this loss through a lengthy grieving process. There are many things that you can say about The L Word. You can say that it was influential. You can say that it was important. You can also say that it was terribly written, never consistent with its characters and at the end of six years, completely pointless. But that still does not change the fact that its passing will leave a massive void in the heart of humanity. The L Word and I have a love-hate kind of relationship. For instance, I love lacy bras, Dana, lesbians playing basketball, Helena, lesbians dancing to Salt-N-Peppa, Dawn Denbo and her Lover Cindy, Carmen in her underwear, and Lisa the lesbian-identified-man. On the other hand, I hate the spirit/ghost of an awesome character dancing in waterfalls, Jesse Spano, babies, a certain deaf lesbian, all of the music by Betty, breast cancer bike rides, Shane’s dad Eric Roberts, manatees, Jenny dating anyone, Lez Girls and the entire fifth season, Paige, and everything Kit says.

Despite the fact that most of the time The L Word made me want to club myself in the face, it was the first time more than one lesbian was represented on mainstream television. In honour of the death of The L Word, here are my keen speculations on the future of lesbians in a world without their friends Bette, Tina, Alice, Jenny and Shane.

Top Six Things That Will Happen To Lesbians After The L Word:

1. They Will Have to Get a New Hairstyle

2. They Will Stop Getting Married

Besides the obvious fact that most lesbians cannot actually legally marry, I forsee a severe drop in those lesbians who can. If The L Word warned us about anything, it was marriage. If you are foolish enough to trust another lesbian, you will most likely be cheated on with a carpenter, be left at the altar, or sucked dry of your income and stripped of the children you never really saw anyways. You might also be subject to risky renovations with dubious outdoor stairways.

3. They Will Have Absolutely No Reason to Listen to Betty

Unless you are actually in the band Betty, you should not be listening to Betty. Their music is abysmal. It is also not really music. I’m pretty sure that repeating words like “loving, laughing, leaving, lying, losing” is not singing. But it is bad. After suffering through their songs for five seasons, lesbians will realize how much better their lives are without them.

4. They Will Adopt Less

As most lesbians know, the statement “let’s make a baby, baby” never ends well. But it does, however, end with an actual baby. Now, I am aware that scientists have yet to prove my hypothesis that lesbians can procreate, but television writers have! On The L Word, this statement represented years of tumultuous lesbian resentment toward the adoption process. The angriest lesbian, Bette, wanted her baby right! away! So she made her own baby with her partner Tina. And voila! They had a beautiful, angelic baby named Angie. As for the time they wanted to adopt. Bad news. Even the lesbian-turned-transgender-turned-gay-man Max had an easier time growing a baby.

5. They Will Try Harder to Pick Up

I hate to admit this fact, but I must. One of the best pick-up lines in the lesbian arsenal was ye olde L Word retort. By that I mean that any lesbian with a forehead mole and a mullet could find a willing conversational partner at a crowded bar as long as she dropped a nugget from the show. Now, with the show in a shallow grave, lesbians will have to be more creative with their party language. And that is an unfortunate prospect indeed.

6. They Will Watch More Rock of Love

Any sex starved lesbian knows that the only thing better than having actual sex with women is watching two women make out on television. The L Word can no longer provide warmth to all the cold, sad lesbians. Jodie Foster is no longer famous. And A Double Shot at Love turned out to be completely incompetent at displaying Sapphic erotica. So that leaves us with Rock of Love. Not only does it provide a stew pot of lesbian fantasy: alcohol, strippers, unclear sexual orientation. But it also stars Bret Michaels, who from a far off, foggy angle can actually look more like a woman than some of the female contestants.

I hope that the world will not have to mourn for too long and will find more meaningful things to fill the void. Such as fighting AIDS in Sub-Saharan Africa or looking for that missing girl in Woodstock. Maybe one day, when the world is a better place, they will make The L Word movie, but hopefully without the creator, the writers and maybe some of the actors. And obviously, starring Zac Efron.