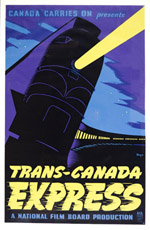 The National Film Board of Canada was created a few months before the beginning of World War Two. Between 1940 and 1945, the NFB produced over a hundred documentaries and forty animated shorts in response to Nazi propaganda. The Canadian Centre for Architecture will screen a selection of these films as part of its Wartime Cinema series, on April 28 to May 21. The films give a poignant glimpse into wartime life, and explore topics ranging from women’s shifting roles during and after the war to the roaming NFB projectionists who crossed the country screening films in as many places as possible.

Wartime Cinema is on in conjunction with Architecture in Uniform: Designing and Building for the Second World War , a photo exhibit that explores architectural activities that took place during the WWII.