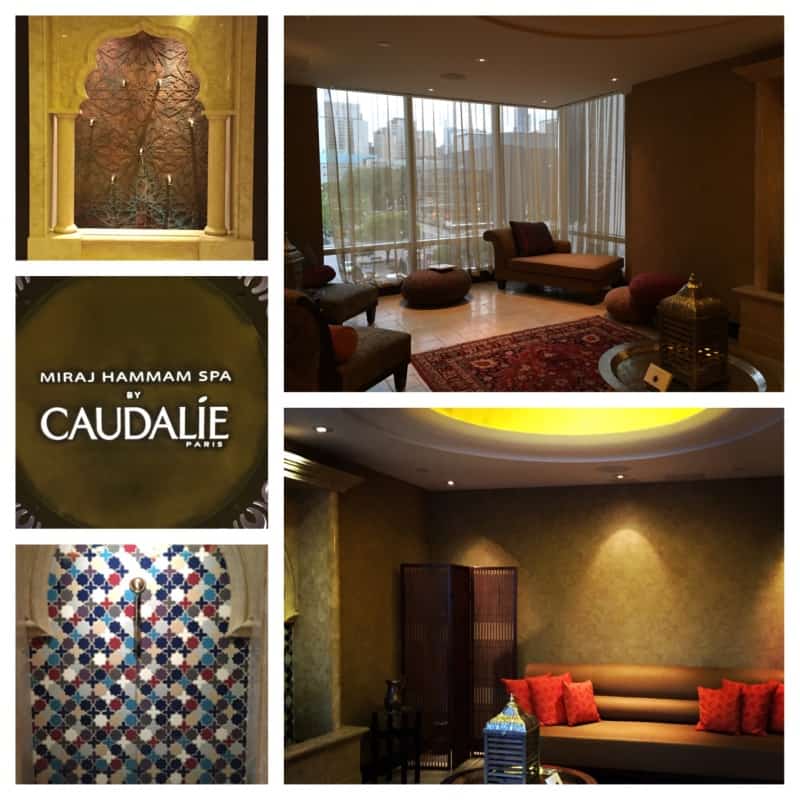 Here’s something you should know about me: I’m upsettingly ticklish. When I get tickled, I get upset. I’m ticklish to the point where I’m unable to fully enjoy one of life’s greatest treats: massages. But when the opportunity to be pampered with a full body exfoliating treatment at the Miraj Hammam Spa by Caudalie came up, I only very briefly hesitated before saying “YESYESYESYESYES OH GOD THANK YOU PLEASE YAAASSSSSSS.” I wasn’t going to let my extreme hatred of being tickled stop me from getting my spa on because, honestly, what kind of glamazon would I be? I’ve gotten manis, pedis, facials and waxings, but “full body” anything was new territory and far too tantalizing to refuse.

The Hammam and Gommage two-part treatment is inspired by authentic traditions of the Middle East. The Hammam section features detoxing in a high-intensity & low mist steam chamber, which is just below 49 degrees Celsius. It’s followed by the Gommage portion, which is a full body exfoliation using eucalyptus-infused black Moroccan soap. The treatment lasts roughly 40 minutes, but if you wanna treat yo’ self to extra decadence and have extra time, you can also opt for adding a massage or clay body masque.

I arrived at the spa, located on the fifth floor of the trendy Shangri-La Hotel in downtown Toronto a mess. My hair looked like a tumbleweed from the chilly October wind and I also smelled like hot meat because somebody (me) thought it would be a great idea to combine an all-you-can-eat Korean BBQ lunch with a spa treatment that would require excessive sweating. I felt a bit out of place in the fancy hotel and even fancier spa, but everyone I encountered was smiling, friendly and talking in soothing hushed tones. Not 20 steps from the elevator were two, count ’em, TWO, trickling fountains. Luxury. The change room alone was nicer than most rooms I’ve ever been in, so huge burn on me. It was fully equipped with not only towels and robes, but also  toothbrushes, toothpaste, razors, hairspray, body lotion and moisturizer (all Caudalie, no less), hair brushes, and fully tricked out showers. Admittedly, this is the first time I’ve been to a spa, so maybe all that stuff is typical, but I was impressed anyway.  SUE ME I’M BASIC.

I changed into my two-piece, which I brought along with me because even though they had disposable undergarments available, I’m not about that. I slipped on one of two different robes available to me (luxury), and followed Yuijnh to the Hammam.

Stepping into the Hammam was pretty intense. The air was thick, the room was hot, the smell of eucalyptus really hits you, but after three or four calming breaths, your body just sinks down into itself and is like “Cool.” There’s two parts to the steam room: the low intensity and then the high intensity, which is the 120 degrees part. I spent 15 minutes in the high-intensity steam, though you could easily hang out in the low intensity if you wanted. It was basically like being in a sauna, but instead of hot wood, you lie on gold marble, and instead of weird old men in towels, there’s just you. Despite it being, uh hello, 120 degrees, I never felt uncomfortable. Maybe it was because my entire body was sweating profusely yet equally, therefore creating some sort of perspiration equilibrium where I felt fine, or maybe it was because the fog in the room made me just close my eyes and really lean into the experience. And for those of you who are wondering, very fortunately for me, the smell of eucalyptus cancelled out any potential of meat sweat from my protein-filled lunch.

The Hammam was so successful at detoxing and destressing that I completely forgot that I was about to have a full body rub-down wearing only a bathing suit bottom. It didn’t occur to me that Tickle Armageddon was upon me until I was topless, face down on another gold marble slab. As I usually do when anyone is about to touch me, I tensed up in anticipation to see if it’s gonna tickle, and was immediately relieved that it doesn’t. I relaxed and melted into Yuijnh’s capable hands. The Moroccan Black Soap has an olive oil base and feels smooth and moisturizing as it’s being applied, and there’s also a citrusy note along with the eucalyptus scent. The exfoliating part comes via an exfoliating glove or maybe cloth, I’m not sure since my eyes were closed on account of me being hella relaxed. Until I had to roll onto my back and get my front side scrubbed, that is. As soon as she started scrubbing at my stomach, it was Tickle Armageddon and I was a goner. Luckily for me, Yuijnh didn’t dwell too much on that area because I’m sure she felt every muscle clench and saw my entire body stiffen and get harder than the gold marble I was lying on. Also, since I was still topless, I felt a bit awkward having my tig ol’ bitties flop into my arm pits as they tend to do when they’re not being reigned in with a bra. But then again, WHO CARES EVEN. Luxury doesn’t have time to be embarrassed.

By the end of it, I felt like an absolute queen. I was relaxed, I smelled delicious, and my skin was as soft as a glamourous baby. The Hammam and Gommage treatment was soothing and invigorating and the perfect compliment to a crisp autumn day. As soon as you step into the Miraj Hammam Spa, the noise and bustle of downtown Toronto trickles away with the water in one of the two fountains. While the price point ($130) might make it a little intimidating to make this a regular occurrence for  yours truly, spas are supposed to be a decadent treat, and this one won’t disappoint.