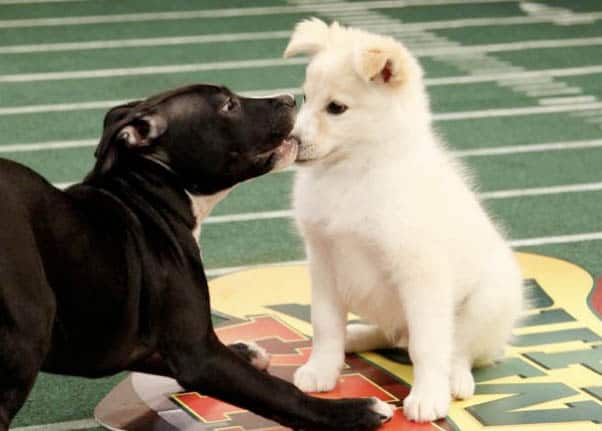 We may know nothing about football, but we know a thing or two about cute puppies (just check our Youtube searches). So this Sunday, we’re skipping the Superbowl (except for the food table and Beyonce concert. DUH) to tune into The Puppy Bowl on Animal Planet.

The Puppy Bowl is exactly what it sounds like: 10 cute little pups running around a faux field and attempting to carry a chew toy into the end-zone. The puppy who carries the toy across that line the most wins the title of Most Valuable Puppy. OMG, right?

Things that also exist during The Puppy Bowl: hedgehog cheerleaders, a cat half-time show, and over 63 puppies just waiting to get some field time. If it sounds like cuteness overload, it is. In fact, there’s even a penalty for puppies who are being excessively cute. 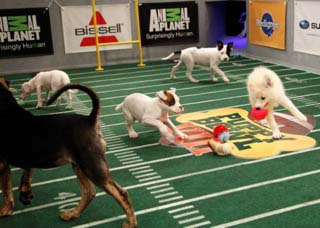 We spoke to Dan “The Ref” Schachner (um, YA! The Puppy Bowl has a referee and he’s a human, go figure) and he told us what exactly defines the excessive cuteness. “It’s when people stop what they’re doing to say, ‘Awwww,’” he said. Somehow we think getting any work done on the set of The Puppy Bowl would be nearly impossible.

All of the puppies come from shelters and pet rescue centres from across America, which means they’re adoptable (!!!). And although Dan The Ref said he would like to keep all of the puppies, he didn’t take them home after the game because he knew that there were families out there who would want those puppies more than him. Canadians can even find a cutie in their neighbourhood by going on petfinder.com! Puppy dreams really DO come true.

We don’t know about you, but our Sunday is nearing perfect with the combination of puppies, Beyonce, and food.