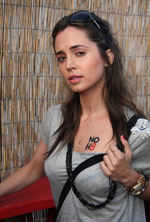 Radcliffe discovers Twitter, her inner activist, as well as her one true love.

Has anyone noticed that activism is super trendy right now? When I was an activist championing the cause of the lack of organic milk in the cafeteria, my efforts were met with the finger and atomic wedgies. Lately, it seems that all those kids who were supplying me with said wedgies are now devoted and respected activists. If, in high school, I had asked Sophia Bush to support my gay marriage rally she probably would have called me a dyke and spit in my ear. Today, she would basically agree to marry me. Remember when Sean Penn was a raging douchebag who dumped Madonna and punched old men in the streets? Presently, he is a national treasure for playing a gay man in a movie about activism, for teaching us the perils of famine and then for that time that he single-handedly saved a woman from Hurricane Katrina in a rowboat. Looking at Sean Penn for advice, I decided that I needed to release that old activist spirit that has been residing in my butt-crack since junior high.

Recently, the cute girl at the coffee shop was discussing a friend of hers that suffered from a twitter, which I assumed was a terrible affliction that combined a twitch and a shiver. While I imagined the pain that this friend of hers must be experiencing, I was informed that Twitter is actually a hip Internet portal. Initially I thought that it was like that stuff people write on bathroom stalls, but I was told that it is actually a keen marketing tool, used by people who want to network and share their important thoughts with others. After I heard that Puff Diddy was a one of the Kings of twitching and a frequent sharer of important thoughts, I thought only of my one true love – Faith from Buffy. I became desperately interested in what she had to say. I learned that among other things, Faith had recently gotten a haircut and received a pedicure. But I wanted to learn more. As I dug deeper, I learned that Faith is a big activist. Not only does she feel passionately about poor people with AIDS in Africa, she was also really into my people – GAY PEOPLE!! Like ME!!! I immediately perceived that she probably wanted to marry me.

I then made a calculated decision to fundraise my bike ride to Los Angeles to protest against Prop 8 – apparently it’s something about gay people not being allowed to marry other gay people. Faith was so against this discrimination that I was not only flattered, but also knew that if Faith and I were to ever get married I would have no choice but to make sure that I was there in person to rally against the evil.

After successfully raising appropriate funds by selling my water colour self portraits and walking the elderly, all that I needed to do was bike 3,000 miles to Los Angeles. Needless to say, it was much harder than I anticipated. I didn’t know that you could get blisters on your elbows. Anyhow, I reached my destination and upon my arrival at the Prop 8 rally, I was delighted to see Sophia Bush, the Asian dude from Star Trek and that guy from that band. Half of the semi-famous people from L.A. were marching for my people. What a glorious feeling!

As if my love quest wasn’t hard enough, I was constantly bombarded by people asking me to sign things, donate money and be involved. They were painfully unaware of the mission I was on. I did, however, stop by one booth to decorate my body with “No H8” tattoos in order to impress Faith once I found her. Well, I did find her with a man. They were kissing. I was sure that she was not enjoying it. Ten minutes later, she glanced in my direction. I was stunned. I got a bad case of cotton mouth but managed to mutter, “Beautiful day, Faith.” I didn’t know what to do with my sweaty hands. I anxiously awaited her response to my subliminal marriage proposal. She shrugged her shoulders and said, “nice tattoos.”

With Faith out the window, I came across another woman that shares many common traits with my ex-almost wife. This new woman is brave, talented, courageous and hates vampires. She is more mature than me, but I respect her drive and her composure. She also makes me laugh. Despite her recent breakdown, I related to the pressures of being in demand. Once Prop 8 is reversed, I intend to marry Susan Boyle. Even though she came in second place in Britain’s Got Talent, she is number one in my heart. Her face is as cute as a puppet, namely Bert & Ernie. Bless her sweet soul.