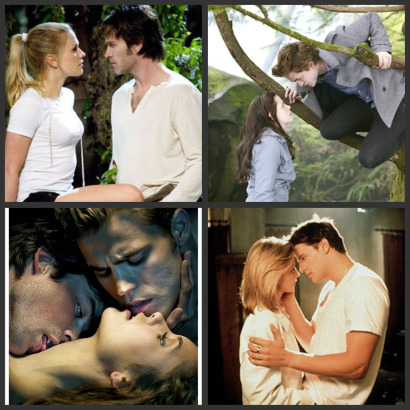 1. Craziness:
I was waitressing on a patio last week and two lovely lesbians asked me to weigh in on their argument. Should lesbian number one get fangs? Butch says no, femme says yes, Zoe says WHATTHEFUCK!? Someone, probably several someones, are considering getting their teeth filed away! Teeth do not grow back people! This vampire business needs to end…

2. Inundation:
I can’t believe how dated Buffy looks. She was feisty, foxy and could kick your ass five ways to Sunday. And that show had heart, mythology and tons of action (both horizontal and high-kicking). But 10 years on and good ole SMG is practically retro thanks to the new wave of vampires bleeding and brooding all over our screens. As a general rule I hate joining the maddening crowd when a trend takes over. And this vampire business is driving me nuts. Can we please just call a spade a spade even if it’s pop-culturally viable and profitable?

Par example: the Twilight series makes me angry. Those books are a poorly written steaming pile of shit that have done a disservice to thirteen year old girls everywhere by giving them an indecisive, weak-willed heroine who does not exist without her man. Also, my 25-year-old brain (which normally dates men a decade my senior) is very confused by images of Taylor Lautner; another strike.

Then you have the television show True Blood. Some might call it culty by I think it’s campy. The show’s creator Alan Ball is terrific (he was behind Six Feet Under) and the tall blond one is a piece alright. I’m all for dirtysexynasty cable TV but I think lots of people are confusing what entertains our libidos with actual entertainment. If the leads could act, if the plot lines actually developed then we might be in business….but True Blood is ultimately just candy. Or candy flavored lube as the case may be.

3. This is all well and legit but I now have to backtrack a little….
I’m totally hooked on the CW’s show Vampire Diaries. I wish it weren’t true. As a society we’re totally vampired out. But here I will present my case for why this is a healthy relationship with fictional vampires and not a passing fad:

STORY! As in, this show has it. Most network shows these days treat their viewers like we have collective ADD. They don’t trust us to pay attention without immediate gratification. They tease non-event plot points and lead up to big events with ridiculous promos and anticipatory dialogue. There’s no mystery. No story-arcs. Recycled plotlines. And therefore there’s no payoff. It feels like the wheels are spinning and we’re getting nowhere. When it premiered, Grey’s Anatomy was quippy, sexy and heartfelt. Somewhere between McSteamy and Mcghost-fucking, it got lobotomized. Remember the thrill when Monica peeked up from under the covers with Chandler in London? Holy shocker Batman! If that was happening in today’s TV climate we would’ve had weeks of dialogue and hinting. The Vampire Diaries manages to advance it’s plot while still surprising it’s viewers. Killing off a main character with no forewarning? Done. Giving us back-story in a realistic and exciting way? No problem. Simple equation: Things happen. They’re exciting and interesting and suspenseful. This makes for good TV.

While reining in the tweens who think anything fang is fangtastic, Vampire Diaries also nods to it’s older viewers. Kevin Williamson, the co-creator, knows what we 70s/80s babies are about; he was behind Scream and Dawson’s Creek. The realistic relationships and cultural innuendo might not be essential for the kids who buy into Rob Pattinson and Kristen Stewart’s chemistry but it’s a requirement for the rest of us.

The season finale is upon us and it has love triangles, history, parentage issues, drama that’s been festering for weeks, multi-layered bad guys (who might not be all bad), exposed secrets and vampires and witches and tigers oh my!

In a Hollywood that does trials and test-screenings and demographic assessments; this show cast all the leads as brunette. What does that say?

Am I being overly defensive? Or do you think you might check out the ‘Diaries?

Is the vamp fad in its dying days? Or have I just made a legion of fanged-‘Blood’y Twilighters pissed? Whoopsie!