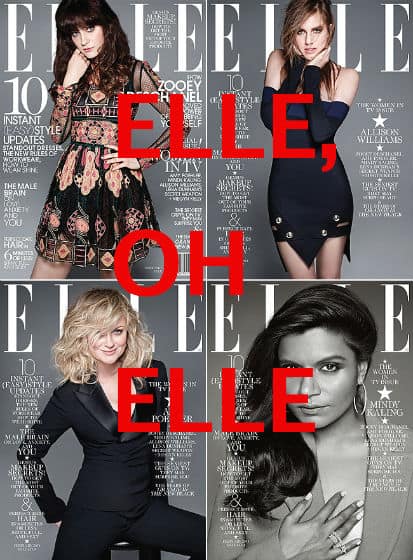 Why I Don’t Approve of the Mindy Kaling Elle Cover

Elle, we need to talk. When I heard that you were going to give three of my favourite television actresses—Zooey Deschanel, Amy Poehler and Mindy Kaling (along with Allison Williams who I just feel meh about)—their own cover for your February issue I was thrilled! Then I saw the covers. I don’t think I need to tell you where this is going. While you gave Zooey, Amy and Allison full-length, full-colour photos, Mindy’s was cropped in close and shot in black and white. What’s the deal? Did you really think we wouldn’t notice?

You maintain that your photo of Mindy looks “sexy, beautiful and chic” and that it’s a “striking and sophisticated cover.” Mindy herself said she loved the pic and that it makes her look like a movie star. Technically this is all true. Mindy’s cover looks fabulous and as a standalone release it would have been great. But by giving her such a drastically different cover from the other actresses, you’re basically treating her like that girl who’s allowed to sit at the popular kids’ table in the cafeteria but who no one will actually talk to. She’s the black sheep. The sore thumb. The red-headed stepchild. Or should I say the brown-skinned size 8 stepchild?

The point is, you chose to take the one actress of the four who isn’t white or a size 2 and give her a completely different cover from the others. What message did you think that would send to your readers other than that no matter how successful Mindy Kaling becomes, she will never quite fit in with the other (skinny, white) TV stars?

And by the way, why did you feel the need to not only crop Mindy’s photo but also shoot it in black and white? It’s bad enough that you were too afraid to actually show a woman who falls right in the middle of the spectrum between skinny and fat. Mindy’s body is gloriously average. But then you also went and gave her the greyscale treatment. You can talk about diversity all you want but did you know that there is more to diversity than just black, white and Latina? I’m guessing that if Mindy had the lighter skin tone of Aishwariya Rai you would have featured her in colour, but Mindy’s deep brown skin was just a little too much for you to handle so you decided to go the “safe” route and hide her skin colour altogether. Needless to say, I’m disappointed. I am half Indian and I’ve enjoyed finally seeing some representation of Indian people on television. You could have treated Mindy the same way you treated her peers but instead chose to Other her.  You can talk all you want about Mindy’s “stunning” cover but until you treat her the same way you would treat any other actress, it’s all just lip service.