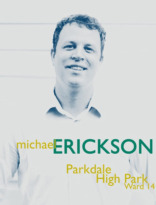 By Becca Lemire
One of the best teachers I’ve ever had was at Ursula Franklin Academy during high school. Michael Erikson was that teacher who forced you to check your egos at the door and think outside the box. He was always a pillar in the community, putting together minority rights meetings, leading trips to Ghana, and was an advocate and safe person to talk to for people struggling with gender, sexuality, emotional or academic issues. He’s just the type of person you would love to see making democratic decisions for real citizens of this city. He was and still is a great teacher, person, activist and artist, and now, Michael is running for City Councillor in Ward 14 (Parkdale/High Park) in the upcoming election October 25th (mark your calendars, Toronto). We are all entitled to our mixed opinions on politics and voting, but as one G20 protestor poignantly put it, “If you don’t vote you shouldn’t complain!”. He’s having a launch party Thursday at Blondie’s (1378 Queen West, near O’Hara) with doors opening at 7pm, and he should be making a speech at around 8:15. Music and performances will take place before and after. Cover is $7 or PWYC with all funds going towards his campaign. You can see more info at http://www.michaelerickson.org/ or follow him on Twitter: https://twitter.com/ericksonfor14 and he’s very active on Facebook, just search his name. Pay attention to this one people, he’s live.