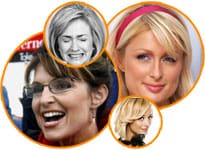 Who wants to be the VP?

Though I try to stick to jabs and stabs at my celebrity friends, never before has the line between politics and celebrity been as blurry as a Madonna covershoot. (I’ve saved you the pleasure of myself donning the pantsuit ensemble, but rest assured there’s a rifle in my pocket.) If the mere presence of bikini-clad gun-totin’ VP wannabe Sarah Palin makes you think Ashton Kutcher is hiding behind the podium, you’re not alone. If you believe Hilary is to Sarah as Nicole is to Paris, you’re halfway there. And if you dug this week’s debate way more than Wife Swap but a little less than America’s Next Top Model, you’re ready.

I propose we call this shit show farce The Amazing Presidential Race. Clever FOX producers will divide the key players into tribe Dumbo and tribe Jackass, forcing survival of the fittest in a sweet loft decorated by our friends at Ikea. Fuelled by free booze and a yearn for power, our contestants will be subject to daily challenges like weapons of mass destruction scavenger hunts, squaring off with the ladies at The View, and beach relay races with buckets of oil balanced in their mouths.

Day one of Vote ‘08? Makeovers! Viewers will vote for their favourites on www.evilorhot.com, the winners awarded with special privileges including free hard question do-overs, the white woman’s vote, and the freebie state of Florida. Contestants will confess their day-to-day campaigning diary in a secret room, unknowing being filmed in night vision. Here we’ll see Obama chain-smoking and Palin thinking and re-thinking of any news publication she reads.

Alright, seriously now, let’s get real and talk spin-offs. After all, focus groups find Biden boring (though silver fox-y) and McCain older than Janice Dickenson; and Obama’s on contract with Queer Eye for the Straight Guy. The American people – and we loser Canadians who don’t care at all about our own election – want Palin. We want pink “I’m a VP” t-shirts, we want fuzzy limo is-that-a-muff? shots, we want Youtube video of club nights out with Ann Coulter. We want drunken nightly rants (“Eaf you, Bearack! You don’t know me!”) and staged grocery shopping with Heidi Montag. We want rehab, “recovery” and relapse.

If the ratings from last week’s vote are telling, Sarah’s ability to recite her lines, be adorable, and rock a Valentino suit make perfectly qualified for television, a dance single, perfume design, political leadership, and prime time reality stardom. Whether picked bachelor styles after a single McCain meeting – though I’m sure their facebook posts were flirty – or receiving voodoo protection from witchcraft, The Sarah Palin Show is a thigh-slappin’ terror-fightin’ six-pack-poundin’ political roller coaster of good times. So hop in, Generation Y, shelve your fear factor at the door and vote Sarah Palin for VP. Just text your vote to NBC after the show.