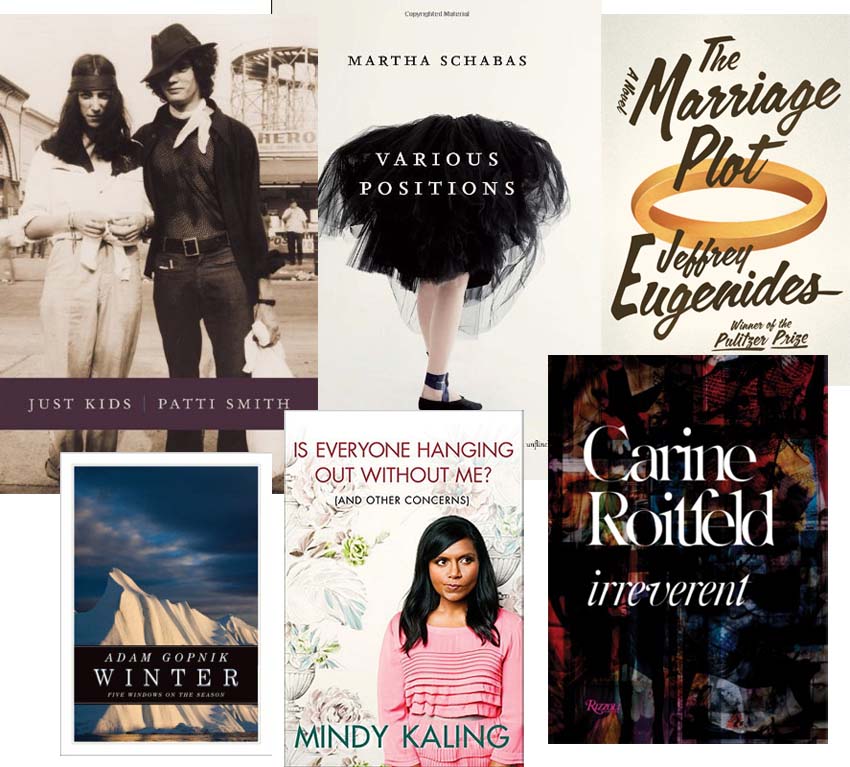 What to do during the down time between Christmas and New Year's? Read books!

The week between Christmas Day and New Year’s Eve is always a quiet one. The city slows down and, for those who go back to their small hometowns for the holidays (Hi), there’s pretty much nothing to do, except watch tumbleweeds blow down the street. Which could be fun, but, well, it’s not. So, during this time it’s good to have a few activities planned to prevent the onset of catatonic boredom. Myself, I’m planning on not getting out of my pajamas for at least four days, wrapping myself in blankets on the couch and reading the shit out of a stack of books I’ve been wanting to get into for awhile. The following is that stack slash my suggestions for good holiday reads.

1. Various Positions by Martha Schabas. An unyielding look inside the intense, challenging and brutally competitive world of professional ballet. Black Swan-y minus psychotic breakdown/remarkable ability of the protagonist to stab herself in the stomach yet somehow dance through the second act of the performance. Various Positions is far more true to our tumultuous teenage years.  “Schabas’s dialogue is often extraordinarily expressive, compressed to a tight code for swirling inner worlds,” praised The Globe and Mail.  Not bad for a debut novel! Yes, Shchabas promises to be one of Canada’s next top literary talents. Read the first few pages, and you will be hooked.

2. Winter by Adam Gopnick. Bestselling author and New Yorker contributor Adam Gopnick’s homage to – wait, guess – winter. Taking us on a journey through the artists, writers, composers and more, who helped shape our current idea of winter, Gopnick creates a beautiful portrait and loving tribute to the coldest, gloomiest, least-liked-by-myself-and-most-people-I-know season.

4. Is Everyone Hanging Out Without Me? (and Other Concerns) by Mindy Kaling. Actress on and writer for The Office (USA) and the girl everyone wants as their best friend, the hilarious and witty Kaling gives us her thoughts on subjects such as romance, what it means to be/have a best friend and why you shouldn’t consider your high school years as the best ever of your life. I love her. I LOVE HER.

5. Irreverent by Carine Roitfeld. The fashion book Of. The. Year. I first wrote about it here and I’ll write about it again: this beautiful compilation of the former French Vogue Editor-in-Chief’s most influential and inspiring work is THE coffee table book of ALL coffee table books.

6. The Marriage Plot by Jeffrey Eugenides. The third novel by this Pulitzer Prize-winning novelist (who gave us The Virgin Suicides and Middlesex) is about an English major who reads Jane Austen and George Eliot and finds herself caught in a real-life love triangle. I’m into it already.

Bring on my pajamas and endless cups of tea – I can’t wait for the holidays. Happy Reading!